David Kelly: The rise of a conspiracy theory 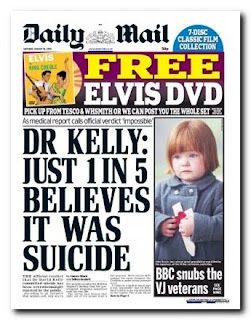 IF THE RESULTS OF OPINION POLLS are to be trusted, the proportion of people in the United Kingdom who believe that the biological warfare expert David Kelly committed suicide declined significantly between February 2007 and August 2010.

Dr Kelly was 59 when he was found dead in woods near his Oxfordshire home in July 2003. Three days earlier he had been questioned by MPs at a hearing of the Foreign Affairs select committee, after he was revealed as the source behind a BBC report claiming that the government had ‘sexed up’ its dossier on Iraqi weapons of mass destruction. When his body was found many believed that he driven to suicide by the manner in which his name had been leaked to the press and by the pressure he had subsequently been put under. Others, however, believed he had been murdered by government agents or by persons unknown.

One of the reasons the Hutton Inquiry was set up in 2003 was to settle this question once and for all. Indeed the government ruled that the inquiry would actually take the place of full inquest. If government’s purpose was to put a stop to conspiracy theories, however, it failed . . . . . MORE