'Something evil had happened . . . I had to go on' - Jersey in the Sunday papers

PERHAPS THE MOST telling feature of the coverage of the Haut de la Garenne story in today's Sunday papers is just how little of it there is. The revelation last week that one of the biggest child protection stories in the history of the British media was based on the delusions and confusions of a senior police officer was extraordinary.

Given that journalists on both broadsheet and tabloid newspapers had, week after week, accepted unquestioningly the pronouncements of Lenny Harper, and continued to do so even after evidence that he had misled journalists had been placed squarely in the public domain, one might have expected a little soul-searching and and even a little self-criticism from some of our more reflective journalists. Yet, unless I have missed something, this is almost entirely absent from today's papers.

To give credit where at least some credit is due, the Guardian managed to run a brief piece on this subject by Nick Davies on Friday, which did make at least some of the points which needed to be made. 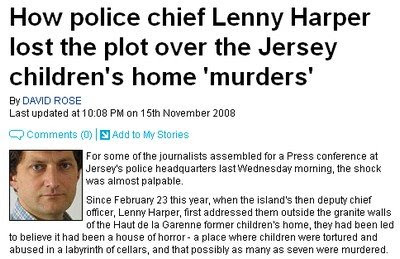 The Sunday papers, however, are almost completely free of such self-criticism. The only detailed report which carries the story forward in significant respects is, as might have been expected, by David Rose in the Mail on Sunday. His substantial article, 'How Lenny lost the plot', appears in the Review section of the paper. It provides an excellent summary of the main points of the Haut de la Garenne saga for which one can only be grateful. Indeed, given the grave implications of the story which he relates, it is both astonishing and depressing that none of the broadsheet Sunday newspapers has even attempted to run a similar investigation.

It should be noted, however, that not all the 'revelations' made in this piece are as new as Rose suggests. Some of the most important were in fact made by Diane Simon (in outline at least) in the Jersey Evening Post in the middle of April and the fact that this has not been acknowledged actually distorts the story Rose is seeking to relate. His account, though, does fill in many crucial details which were previously missing.

It also includes an extraordinary and genuinely new revelation concerning a confidential email in which Harper, in an attempt to maintain the credibility of his investigation in the eyes of his political masters, effectively misreported an entire forensic report.

So far at least there can be no doubt that Rose's is the best piece of journalism about Haut de la Garenne which has emerged since last week's press conference and it is all the more valuable for being without any serious competitors.

Meanwhile in the Observer, Catherine Bennett has produced one of the most interesting reflective pieces which has appeared in the wake of last week's news conference. Although her account of my own contribution is not strictly accurate and she greatly underplays the culpability of journalists, she does at least fleetingly acknowledge the possibility that they might have acquitted themselves better. She also recognises (as Nick Davies does not) that the entire saga has been driven forward by our enduring appetite for evil. At the same time she implicitly recognises that a fascination with evil conspiracies tends almost invariably go hand in hand with extreme forms of credulity.

The forces of evil 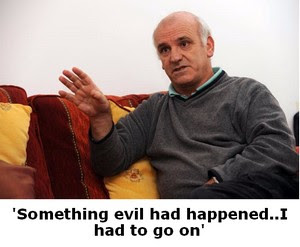 THIS BRINGS US to an article which appears in the newspaper which has been one of Harper's most fervent supporters throughout the Haut de la Garenne saga - the News of the World.

In the video clip carried on the paper's website (click here and scroll down), although he talks bravely, Lenny Harper, almost for the first time, seems to have lost the ebullient confidence he once displayed when addressing the world's media. But he does say one thing which bears repetition. In attempting to explain why he continued digging relentlessly, when all the signs would have indicated to a rational observer that his quest was fruitless, he told the News of the World reporters that 'There was something evil going on at Haut de la Garenne and I felt I had to carry on my inquiry.'

It would seem that my own suggestion that at the heart of the entire story there lies a battle with forces that are imagined as evil is something with which Harper himself agrees. The problem with all such battles, however, is that the invocation of evil is too often used to justify all manner of shortcomings on the part of those who crusade against it. Because, in our own culture, we seem to have adopted child abuse as our ultimate evil, the assumption is frequently made that actions which are less than entirely scrupulous can be justified so long as they are aimed at defeating this evil.

In the case of Haut de la Garenne it would be all too easy to seek to excuse the various misrepresentations in which Harper has engaged by invoking the nobility of the cause in which he has been fighting. One of the many reasons for resisting this argument is the seriousness of the consequences that have flowed from his actions. In the first place there has been a huge waste of police time and huge expense, running into millions of pounds, has been unnecessarily incurred.

Even more importantly, a great deal of damage has been done to the cause of child protection by the promotion of unfounded claims. These will inevitably undermine the credibility of those who make genuine allegations of child abuse and it is at least possible that they have jeopardised prosecutions which would otherwise have been soundly based. At the same time, because of the credulous response of journalists, the newspaper-reading public in Britain - and indeed far beyond - have been encouraged, over a period of many months, to become caught up in what amounts to a massive collective delusion.

How Lenny Harper himself should be dealt with is a matter ultimately for the police and the authorities on Jersey. Whatever conclusion is ultimately reached with regard to Harper, however, it should not be allowed to distract us from an issue which is just as important – the culpability of journalists. For the journalists who have covered the Haut de la Garenne story, and the editors who have relentlessly published and broadcast the ill-researched or unresearched stories they have written, do bear a huge responsibility for what has happened in Jersey over the past year.

It is a responsibility which, on the evidence of the stories which have appeared – or which failed to appear – in today’s papers, they seem markedly reluctant to shoulder.

To read responses to this post - or to leave a response yourself - click on the comments link below. Expressions of agreement are always welcome; so too are dissenting views.